Next week for most Utahans is spring break, and like most Utahans, we are taking the pilgrimage to California.  We just can’t get enough of the crowds, the traffic, and the overpriced amusement park food.  Not to mention the 12 hour car ride.  Count us in!  According to the Personal Consumption Expenditures data released this morning, this trip will cost us 2.1% more than it would have last year.  PCE measures household spending on goods and services, and is the federal government’s favorite measure of inflation.  The Fed is concerned about rising costs and wants to see them right about that 2% level: maintaining growth, but not excessively.  I’ve got news for you Madam Fed Chairman and Mr. San Diego Mayor: I am planning on spending waaaaaay less money on this year’s trip, and it’s not just because of the surf lessons that my wife found on Groupon.  This trip will be cheaper because we won’t have to buy a new car to get back home (hopefully!).

Stocks are up and Bonds are down after this morning’s latest GDP report showed consumer spending rose 3.5%, driving corporate profits up 9.3%, both compared to this time last year.  The final reading for Gross Domestic Product in the 4th quarter of 2016 came in at 2.1%, taking the expansion rate for the year of 2016 overall to 1.6%.  That’s 1.0% below 2015’s growth, and the most anemic since 2011.

The Case Shiller 20-City Index rose 5.7% over the last 12 months, which is up from the 5.5% year-over-year gains posted the previous month.  In my little experience, I am seeing that rising home prices and rising interest rates are making it increasingly difficult for low income families to purchase a house.  Though the value of goods in most sectors is increasing, there is a buyer for just about everything out there for sale.  Consequently, Consumer Confidence swelled well past the 113.3 expected index reading to an astonishingly high 125.6.  Consumer spending accounts for 2/3 of the economy, so a positive outlook is a big deal , because it typically leads to big spending later on.  The danger to the mortgage market is that with increased spending and higher prices comes inflation, which always pushes interest rates upward.

Up until just a few years ago, I got all the “news” I needed from David Letterman.  Dave of course had a background as a serious news journalist, and brought enough current affairs into his opening monologue that I felt able to stay in touch with what was happening in the world without needing the likes of Dan Rather in my living room.  Nothing against Dan Rather of course, but the delivery method is just a little too dry for my taste.  Plus it was on the late show that I heard about Simon and Garfunkel getting back together for a reunion tour.  Their performance that night in 2003 was one of the most euphoric moments I have experienced being glued to a television.  Perhaps that says too much about where I lie on the “this is important/this is not important” spectrum.  But for me, that moment was as eventful as the biblical presage of the lamb and lion lying down together and enjoying a charger brimmed with alfalfa.  It could be that Art Garfunkel’s hairdo has always appeared sheep-like.  Yet again, I digress.

Things have changed, and today I watch the news to see what is going to happen to the financial markets as a result of votes cast at a session of Congress.  On the docket today is the possibility of a repeal of the Affordable Care Act.  There are 535 different agendas at play of course, but the major squabble here is some members want the federal government quit funding the ACA so that the savings allow for a tax cut.  This bold move is being acclaimed as neutral for the government’s checkbook, which is a step in the right direction with regards to the state of our current deficit.  Albeit neutral for the government, the effect that interests me for the purpose of this publication is what happens to interest rates.  Businesses paying less in payroll/benefit expenses and taxed profits would have a marked impact on corporate America’s bottom line.  As a result of higher retained earnings, stocks would soar even higher, most likely at the expense of bonds.  What that means for you and me is higher interest rates, coming slowly and surely.  “Still a man hears what he wants to hear and disregards the rest, ooh la la la la la la la” –Simon and Garfunkel “The Boxer”.

Existing Home Sales fell 3.7% last month, lower than expectations by 210,000 transactions.  The inventory of available homes for sale dropped 6.4% last month and is at the lowest levels in history–in history.  The short supply of homes for sale continues to drive prices up: the median home price of $228,400 is an increase of 7.7% from this time last year.  Another measure of the historical price of homes, the FHFA (the parent entity of Fannie & Freddie) Home Price Index, shows a 5.7% increase from a year ago.

The markets are quiet.  The news reels are quiet.  The phone is quiet.  We can either look at nonsense on YouTube or we can look at the technical picture mortgage backed securities.  One seems more interesting than the other, but since I am sitting in my office and my kids still expect me to pay for their food, let’s have a quick look at the YTD mortgage market.  This chart shows that pricing has jut pushed back up through the ceiling of resistance and is now back in the January-February trading range. 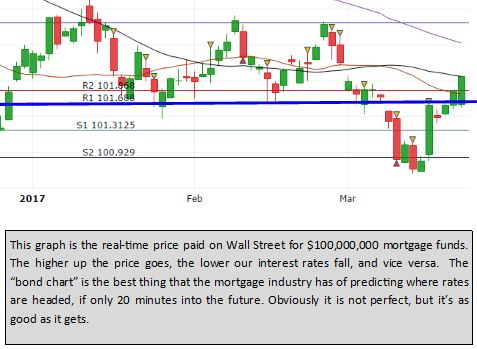 Your guess is as good as mine on whether it heads back up to keeps rates down or not.  It’s amazing that the pricing has remained so strong for so long, in spite of bettering economic data and rising short-term rates.

By now you know that the Fed raised their rate by 0.25% this week. On the day that happened, mortgage rates (which had been getting worse over the previous week) actually moved lower after the Fed’s announcement.  It wasn’t a dramatic, life altering change; just a serendipitous occurrence that helped a few clients get what they needed.  Like many aspects of life, the markets move in mysterious ways sometimes.  If we could all tell the future, we might make different daily decisions.  Since we can’t, we just do the best we can with what we have and hope for the best.  I hope that you enjoy your St. Patrick’s Day and have a pleasant spring weekend!

So the Fed did in fact raise their rate 0.25% yesterday, and over the next three hours, both stocks and bonds rallied.  The MBS market in fact, jumped 75bps, allowing mortgage rates to settle back into their pre-meeting groove.  What gives?  During her speech, Janet Yellen gave several cues (or should I say “coos”–ha ha) that indicate that the Fed may be lowering its expectations on the speed that the economy should be expanding.

The first is the observation that core inflation, excluding food and energy costs, is still under the target 2.0% growth rate that the Fed is expecting.  They want the growth centered on 2.0% (allowing for readings higher or lower that 2.0%) whereas before, the target was the 2.0%-2.5% range.  The second cue that all is not rose petals and puppy dogs is that the vote to hike rates yesterday was not unanimous; there were voting board members in favor of leaving rates unchanged.  Still it happened, and still, Ms. Yellen is planning on three 0.25% rate hikes this year and next year.

Today at 2:00 and then again at 2:30 the Fed will address 320 million Americans to let them know that the interest rate on their credit card is going up.  The Fed of course has control over the Fed Funds Rate, which directly affects the Prime Rate (PR=FF+3.0).  Though that’s the only rate that they control directly, raising the cost of borrowing money overnight indirectly impacts the cost of borrowing money longer-term too.  Generally speaking, the longer you want to string out your payments, the higher the rate you are going to pay. The converse is also true: the longer the time period that you are willing to let someone use your money, the higher the yield that you will receive as an investor. That’s called the yield curve, and for the last nine years it’s been flatter than usual–mostly because, here in the U.S. anyway, 0% is as low as we went on the short end.  So as the Fed continues to raise their rate, all other yields will naturally follow suit, heading north in an untidy, much speculated and well publicized fashion.  In fact, since a 0.25% bump is a given today, longer-term rates started coming up a few weeks ago.  We’ll see what happens in a few hours.

As I see it, there is no reason that Janet Yellen & Co. will not raise rates today. The economic data released this morning has been just as jolly as it has been all month.  The NAHB Housing Market Index jumped to it’s most optimistic position in the last 12 years.  Retail Sales are up 0.2% even without transportation figured in.  Empire Manufacturing rose higher than anticipated, and the Consumer Price Index is up 0.1%.

I think that we can learn a lot by looking for patterns.  For example, from working in the same office building for the last 13 years, I have noted that it’s growing nearly impossible to turn left out of my building and onto State Street between 5:00 and 5:30 PM.  As a result, I either cut out early or stay late.  Looking at the pattern of the 10-Year Treasury Note Yield over the last 55 years, it has traded in a clearly defined downward channel for the most recent 35 years.  It’s possible that the yield continues to decline, but it’s more probable that the pattern is going to break to the upside in the next few weeks to months.  Currently, that red boundary to the north lies at 2.635%.  The 10 Year today is at 2.59%.  The Federal Open Market Committee meets today and tomorrow, and they are expected to announce a 0.25% increase in interest rates tomorrow that will push that blue squiggly line right up next to that 35-years-and-counting straight red line.  It will then only be a matter of time until it crosses the red line and, IMO, shoots straight up to 3.0%.  Catching a low interest rate on a mortgage is just like catching a break in traffic:  timing is everything.