Analysts see us at the intersection of recession and recovery and are still debating which direction we are heading.

Personal Income rose 0.2% last month, lower than the 0.5% from the month previous.  During the same period, Personal Spending only rose 0.1%, below the preceding month’s 0.4%.  The great thing is that as a country we actually spent less than we earned (this is speaking of consumers as a whole, not the squandering sovereignty).

The ongoing argument regarding our economic endeavors is between “don’t spend money you don’t have” and “if we don’t buy stuff then the economy slows down”.  Don’t get me wrong, I love buying stuff (I freely admit that it’s an addiction), but  I am a fiscal conservative who believes that living a principle-built life will bring more peace and prosperity than one of systematic speculation.

There aren’t any surprises out today.  Russia and Ukraine are still fighting in the streets.  Pending Home Sales (under contract and not yet closed) are up 3.3%, greater than the 0.5% estimate, and also greater than last month’s negative number.
Stocks are down; the S&P is back under 2000.  Interest rates are testing year-long lows right now…Thirty year FHA loans are at 3.5% and Conventional loans are at 4.125%. Fifteen year rates are way lower at 3.0% (APR will be higher, depending on the loan and down payment amounts, and amortization term–as closing costs and the presence of mortgage insurance affect each loan differently.)

The headline Durable Goods orders shows a rise of a whopping 22.6%.  Dissecting the report however shows a massive order from Boeing Aircraft, and after you strip out the transportation sector (due to the volatile ordering process and enormous price tag), the net–or core–Durable Goods orders actually declined 0.8%.
Oftentimes Stocks buy or sell on the headlines and then reverse direction after the information is digested.  The S&P 500 Index just breached the 2000 threshold after today’s opening bell.  The index is up almost 20% from a year ago.  The bond chart has seen very little movement since the end of May.
Thirty year FHA loans are at 3.5% and Conventional loans are at 4.125%. Fifteen year rates are way lower at 3.0% (APR will be higher, depending on the loan and down payment amounts, and amortization term–as closing costs and the presence of mortgage insurance affect each loan differently.)

The Chair of the Federal Open Market Committee, Janet Yellen, addressed economic highbrows in Jackson Hole this morning.  The photo-illustration of the double barrel shotgun represents the Fed’s two part mission: maintain price stability and maximum employment. Price stability will be more of a challenge as interest rates start to rise, but right now I’d like to share data of the employment trend over the last five years.  Note that the Unemployment Rate has dropped in the last three years, but so has the Labor Participation Rate (percentage of the population that are actually working). 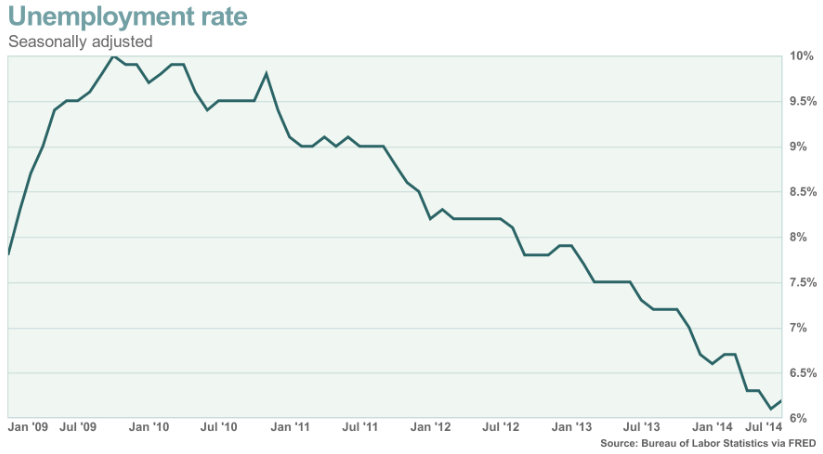 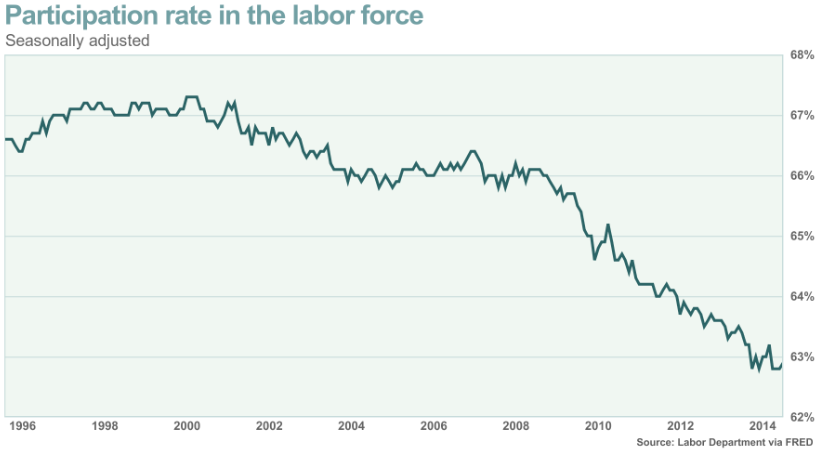 It is also to see how our collective paychecks have fared over the same period: 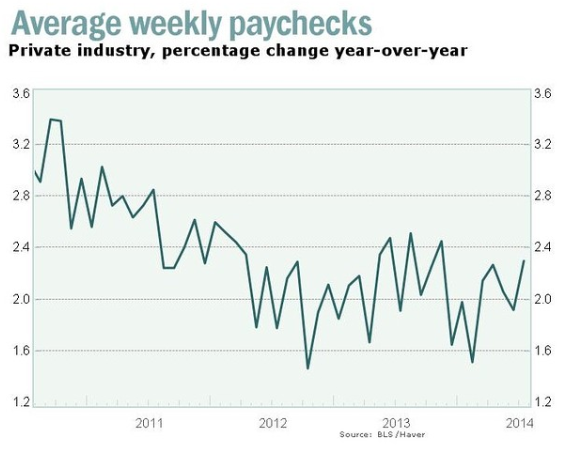 And the number of part-time workers skyrocketed as the housing crisis unfolded: 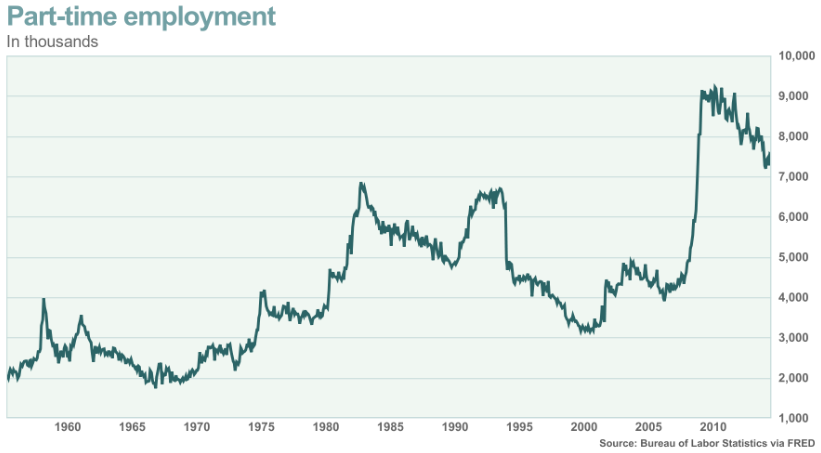 Bad news for a guy who feeds his family by helping other families borrow money: All-cash sales increased to 37.9% of purchase transactions funded in 2Q 2014.  This is an increase from 35.7% the same time last year.

The fed minutes from the latest FOMC meeting will be released here in couple of hours. I anticipate that they will indicate that the Federal Reserve currently plans to keep short term interest rates low through mid-2015.

After a summer of laisser aller scheduling, it’s nice to get settled back into a routine with the kids heading back to school today.  My first lesson is that the carpool lane at the junior high is substantially more complex than that of the elementary school.   You know who didn’t take the summer off is home builders; Housing Starts rose almost 16% in July alone to raise the annual units to just back over 1M.  Building Permits are also higher than expected, at 1.052M. Inflation at the retail level was moderated with the Consumer Price Index registering a 0.1% modest gain, dropping the year-over-year increase to a nice round 2.0%. Thirty year FHA loans are at 3.5% and Conventional loans are at 4.125%. Fifteen year rates are way lower at 3.0% (APR will be higher, depending on the loan and down payment amounts, and amortization term–as closing costs and the presence of mortgage insurance affect each loan differently.)

It’s not very often that you hear it, even outside of Utah County.  Analysts hesitate to mention “it-which-must-not-be named” and traders tremble at the very thought: DEFLATION.  All around the globe, and especially in Europe at the moment, the D-word is rearing it’s fabled head.  The German 10 year bond currently has a yield of 1.0%, the lowest return in over 100 years.  The U.S. 10 year has fallen to 2.38% this week, and is expected to decline further in weeks to come.  One might conclude that the cause is media fear-mongering or an overreaction by equities investors cashing out of record-high-priced stocks.  Rather than playing the blame game, I think that is beneficial to establish that when societies lose faith in the system, the result is the devaluation of that system and prices fall.

And that means that lower interest rates could be on the horizon.

Yesterday I touched on Retail Sales not showing any growth in July, and yet over the same period consumer debt has increased.  This chart illustrates that first point of Sales have tapering off over the last four months.  This morning the news is focused on Europe’s stagnant economy (France GDP is 0% and Germany actually contracted 0.2% in Q2).  The recipe for disaster is compounded by the region’s massive overhanging debt and questionable ability to repay.  Glad we don’t have those problems here in America.

At any rate, despite the Federal Reserve continuing to sell off their holdings of mortgage backed securities, interest rates look to be staying low for awhile.

Despite an increase in consumer credit last month for big ticket items, Retail Sales remain unchanged. So it looks like we are borrowing more money to buy the same old stuff.  Consumer Spending overall is at the lowest level in six months.  But all that will change because school starts next week and the kids’ supplies list is a whole page long, in addition to the clothing that they will outgrow by Thanksgiving.  Where is my credit card anyway?

The largest settlement to come out of the housing crisis was announced today wherein the Department of Justice is mandating that Bank of America cough up $17,000,000,000 (that’s billion) for selling bad mortgages.  Citi’s $13B and Chase’s $9B pale by comparison.  If you’ll remember, BofA was strong-armed into acquiring Countrywide’s portfolio about five years ago.  That’s where the bulk of the “toxic” loans were sourced.  But that’s now old news and we move on to a Ukraine jet being shot down and Russia banning food imports from the U.S. The dawn of a new cold war on the horizon just begs the question: “where is Tom Cruise when you need him?”